skip to main | skip to sidebar

I has an Award Flavor 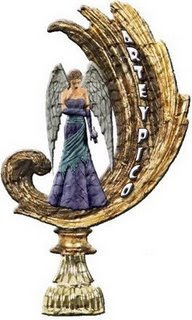 The Beautified, Intellisuper, Wonderspecial Doxy has given me a Big Shiny Metal Award!

She said, "Grendel is a fine writer and theologian." I had to look up this word, but it means somebody who Thinks About God a lot. I do. And gravy, too, but there isn't a word for that yet, unless I Make It Up. How about Gravylogian? (It's not Lying, it's just Making Stuff Up.)

I am going to keep the award on top of my kennel, next to the Bottle of Gravy. It is called the Arte Y Pico Award and it means I am Snouterrific!!!!

There are these two guys, Mr. Arte (he is real Tall and wears a Hat and Sunglasses like the Blues Brothers and has one of those canes that has a compass at one end in a Secret Compartment, for espionage) and Mr. Pico (he is short and has Cool Red Converse Shoes and can juggle) and they travel through the InterTubes helping out People and giving Awards. They gave the Big Shiny Metal Award to my Dearest Doxy and she gave it to me. One of the rules is you have to thank the Two Award Guys. Thanks, Arte! Thanks, Pico!

It took me A Long Time to post this because I Needed Help with the Links and Looking up the People. I Thought about it Real Hard.

Here are the other rules:
1) Pick five blogs that you consider deserve this award for their creativity, design, interesting material, and also for contributing to the blogging community, no matter what language.
2) Each award has to have the name of the author and also a link to his or her blog to be visited by everyone.
3) Each award winner has to show the award and put the name and link to the blog that has given her or him the award itself.
4) Award-winner and the one who has given the prize have to show the link of Arte Y Pico blog, so everyone will know the origin of this award which is here: Arte Y Pico.

Here are the Five Goopersons that I want to give the Big Shiny Metal Award to:

Under There
(I accidentally called him "Underwear" but he didn't Get Mad). This guy is a Hero! He does Noble and Difficult Work and writes Wonderful Stories about it. And he Accepts Dogs and Dead Fishes. Bravo, Under There! You Rock So Very Hard!


Brian R
This is a very Eloquent (I had help with that word) and Uplifting Blog. Brian R talks about Ethical Dilemmas (more help) and Living in a place where Church People aren't always Nice, which is Tough, but he takes the Lemons and makes Gravy out of them (That is a Mixed Metaphor). He is a Librarian like Rupert Giles so you know he Kicks Serious.


Kristin
She says that she is One of God's Wayward Brats but that is Not True (sorry, Kristin). Kristin has a Very Big Heart, and I love her. Kristin is Fighting a Very Hard Fight because she Fell Down a Rabbit Hole and Got Cancer. I know she will be ok 'cause God needs her to Do Some Work, and so she will Get Healthy. Take your shoes off and laugh, Kristin, Do It Now!


God's Dog Sled
This is a look at going up to Alaska and Seeing Beauty and Spreading Love Everywhere, even if it is kind of Cold sometimes. (I looked for the Sled Dog, but did not see him, it must be a metaphor again.) I like the Pictures a lot, because they look like Poetry. It is Very Inspiring. I want to be God's Sled Dog, too, but I would like the Little Booties on the Paws if I have to walk in the cold, because I am Not Used to It. Peace out, Rev. Carol!

Father Christian Troll.
There are Scary Trolls that hang out Under the Bridges (watch out, Under There!) and some even scarier one that Hang Out in the InterTubes, but this one hangs out at St. Onuphrius Church where he Carries a Very Big Doctrinal Stick. I am a Little Scared of him, but he is Very Brave and says exactly what is on his mind. It is Performance Art. Have a Big Shiny Metal Award!

You ARE snouteriffic Grendel, and very deserving of this high honor. Congratulations on your award.

Thank you, Grendel. I am deeply honored. Like you, I am a dog, but I am of the two footed variety. Everyone who's part of God's sled dog team gets booties. The ice can get really tough on our paws. Blessings. C.

You got here quick!

I like this: "All God's sled doggies got Booties"

That was a great post at your place about the Last Day! Thanks so much for doing it.

Thank you Grendel for this honour.
I have taken your photo (the one with the ears up and down which is my favourite) to show a dear friend who is a major, major dog acceptor. I sometimes stir her because she will not even go on holidays and leaver her dogs with family members who I am sure would look after them, However she needs prayers as while she is an elderly lady she still looks after one of her daughters who while in her 50's has never grown up properly in her mind. Now this daughter has kidney failure and needs dialysis so the dear old lady has to care for her twice as much and still looks after her dogs.

I hope Cub, with her golden tail, is already part of God's sled dog team. I think she would enjoy it.

Grendel - you sure deserved this award and then you picked really good blogs to share it with.

Does it come with gravy???

Grendel, you are a true award winner and deserve it! Thank you for even putting me in the same post with the other wonderful blogs. I am delighted!

Dogs and people Who Accept Dogs